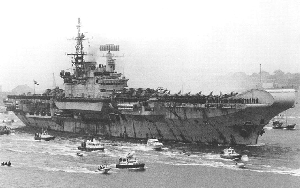 HMS Hermes (and Capt. Middleton)
Returning to Portsmouth after
Action in the Falklands War, 1982

I can still remember the Falkland’s War as if it were yesterday.
I recall sitting in a classroom in Johannesburg, just twelve-years-of-age, debating the merits of the war with my teacher.
War was not an unusual subject of discussion for a boy born and bred in Southern Africa.
My native country, Rhodesia, had just fought a long and bloody bush war, while my land of domicile, South Africa, was itself embroiled in a vicious war in South West Africa (now known as Namibia).
But, as we discussed the events unfolding in the Falkland’s, little did I know that a South African serving in the Royal Navy, namely Captain (later Rear-Admiral) Linley Middleton, was at that very moment in time not only involved in the conflict, but in command of one of the Royal Navy’s foremost ships-o,-war, the aircraft-carrier, H.M.S.”Hermes”.
It was only years later that I came across the name of this intrepid soul, and was intrigued when I discovered that he was educated in South Africa, at Dale College, in Kingwilliamstown, in the eastern cape.
I later spoke to this most affable and modest of men, on the phone, and I recall vividly his only concern: how was the weather in South Africa?
And yet,this remarkable man is completely unknown in his country of birth! This article will endeavour to rectify that travesty.


Linley Middleton was born in East London, in the Eastern Cape, South Africa,in August 1929, and as mentioned before, was educated at Dale College, Kingwilliamstown, South Africa.
He then enrolled as a pupil pilot in the South African Air-Force (SAAF), and then entered the Royal Navy, qualifying in 1952 as a pilot in the Fleet Air Arm (FAA). He subsequently served on various ships of the Royal Navy, during which time he took part in the debacle that was the Suez Canal Crisis (1956).
Middleton then served as commanding officer of No. 809 Squadron, FAA, on board H.M.S. “Hermes”, a ship he would later command. He thereafter served in varying capacities, including that of commanding officer of H.M.S. “Whitby”and Director of Naval Air Warfare (1978-1979).
It was in 1980 that this flying sailor, hailing from South Africa, took over command of the aircraft carrier H.M.S. “Hermes”,which two years later, he would take to battle in the cold waters of the South-Atlantic.


The Falkland’s War began on the 2 April 1982, with the Argentine invasion of the Islands. It was not long before Margaret Thatcher and the British Military Machine rolled-into-action.
Three days after the Argentine invasion, Captain Middleton left Portsmouth in command of the “Hermes”, the aircraft-carrier’s complement being supplemented by a detachment of Royal Marines.
As the “Hermes” left Portsmouth, her crew, and the Royal Marines, as well as her complement of Sea King Helicopters, were displayed, resplendently, upon the upper deck of the aircraft-carrier, clearly visible to the multitudes who had thronged to see the departure of their loved ones aboard H.M.S. “Hermes” and her sister carrier, H.M.S. “Invincible”.

On the 21 April 1982, two weeks after leaving Portsmouth and heading south for the Falkland’s and war, and still 4,500 Kilometres from her destination, the “Hermes” launched a Harrier jet in a bid to keep a watchful eye on the antics of an Argentinian Military Boeing 707, which was monitoring closely the progress of the British fleet.
The Harrier, although carrying live missiles, had been given explicit orders not to intercept the Argentinian Boeing, but just to observe its predations. The Boeing subsequently flew off, heading back to its base in Argentina. The “Hermes” eventually arrived off the Falkland’s Islands during the last days of April.


It was after the fall of South Georgia,on the 25 April, that Captain Middleton and the “Hermes” became actively involved in the war, partaking in the assault on Port Stanley. A complement of Hermes’ Harriers took part in the attack on Port Stanley, which took place on the 1 May (May Day), the air-defences of the British Fleet being aggressively probed by Argentinian Mirage fighters, as the British fleet moved ever closer to Port Stanley, and a fierce dogfight ensued with the Argentinian’s losing two Mirage’s.
Events began in earnest for Middleton and his ship when the Argentinian cruiser, the “General Belgrano” was sunk by a British submarine, H.M.S. “Conquerer”, on the 2 May, and a retaliatory attack from the Argentine Air Force resulted in H.M.S. “Sheffield” being hit by an “exocet” missile, casualties being incurred.


The “Hermes”, under the command of its South African-born Captain, helped in the evacuation of the “Sheffield”, the wounded as well as the rest of the crew being taken aboard, including the “Sheffield’s” commanding-officer, the aptly-named Captain Salt!
Middleton and the “Hermes” also ferried doctors and fire-fighting equipment to the stricken destroyer, but all to no avail, because the mortally – wounded “Sheffield” sank on the 10 May, six days after being struck by the argentine missile.
With the capture of Darwin and Goose Green on the 28 May, and the fall of Port Stanley on the 14 June, just over two months after the commencement of hostilities, Argentine General, Mario Menendez, signed the terms of surrender, and capitulated to the British troops under Lieutenant-General Sir Jeremy Moore, of the Royal Marines.
The Falklands war was effectively over, and Middleton and the “Hermes” returned to Portsmouth, Middleton subsequently being promoted to flag rank.


He was appointed Flag Officer of Naval Air Command, in 1984, receiving the C.B. in 1986, and retiring from the Royal Navy the following year, after an illustrious career spanning thirty-five years! So it was that this remarkable South African, Rear- Admiral Linley Middleton, Royal Navy, who had left his country thirty-years-before in order to serve with the “senior service”, commanded the aircraft-carrier “Hermes” with distinction during the Falkland’s War, and it is sad to think, that upon the twenty-fifth anniversary of that war (in May/June 2012), possibly only a handful of people in his country-of-birth, South Africa, were even aware of his existence, let alone his endeavours.

Recent Posts from This Journal